"I expect nothing. I fear nothing. I am free," reads the epitaph on the grave of Nikos Kazantzakis, located in a cemetery in Heraklion on the island of Crete. Kazantzakis, of "Zorba the Greek" fame, is not merely an author, poet, translator, and philosopher - he is an institution.

His status as an institution extends beyond the borders of Greece. The International Society of Friends of Nikos Kazantzakis operates throughout the world in order to preserve his heritage. Among its activities is the publication of an annual journal and the organization of events focusing on the author and his work. The society was established in Geneva 20 years ago and has branches throughout the world, including in Syria, Egypt, Lebanon and of course Israel.

On Saturday evening, a few dozen people convened in the expansive, lovely home of Greek Ambassador to Israel Nicholas Zafiropoulos in Kfar Shmaryahu, at round tables on the pool patio. A Cretan-style meal was already laid on the tables, accompanied by ouzo-spiked lemonade. A small stage was set up on the side. This was the annual meeting of the Israeli branch of the International Society of Friends of Nikos Kazantzakis.

Established in 2005, the branch currently has about 20 members, who meet to talk about Kazantzakis and his work.

The first two annual lectures were delivered in a private home in Tel Aviv, but last year Zafiropoulos opened his home to the group, which returned for this year's annual event as well.

Daniel Dalyot, a geriatrician from Tel Aviv, founded the society's Israeli branch. "I've had an attachment to Greek culture since childhood," he says. "I received 'The Iliad' and 'The Odyssey,' as gifts and have loved Greek culture ever since. I first traveled [to Greece] when I was 16, and I love Greek music very much."

Dalyot is not alone. Many Israelis have fallen in love with Greek culture.

Many are attracted primarily to Greek music and food, but they are not the only draws. A growing number of Israelis in the arts, media, and other professions study Greek, travel to Greece frequently and draw inspiration from Greek culture.

Several members of the society study Greek with teacher Leon Siam, a singer and native of Thessaloniki who immigrated to Israel in the 1970s.

They listen to familiar Greek songs and study their lyrics. "It is an extremely difficult language," Dalyot says. "We are still breaking our teeth after a year." Screenwriter and film critic Kobi Niv, who attended the event on Saturday night and who studies Greek with Siam, explains, "I got involved with Greek culture via Aris San [a Greek singer who emigrated to Israel] and Yehuda Poliker [an Israeli singer-songwriter who is the son of Greek immigrants]."

Yehuda Melzer, publisher of Sifrei Aliyat Hagag (Books in the Attic) and a former philosophy professor, connected with Greek culture by means of his partner, Lily Eiss-Perahia, who divides her time between Israel and an Aegean island.

He spends two months a year on the island and has already befriended some of its prominent cultural figures, including director Theo Angelopoulos and a few writers.

"It's the combination of the landscape and the people," Melzer says. "Greeks have an endless ability to be happy, and we Israelis can only learn from them."

Nikos Kazantzakis was born in Heraklion on the island of Crete in 1883. He studied law at the University of Athens and, later, philosophy at The University of Paris-Sorbonne.

He translated Friedrich Nietzsche, Charles Darwin and Henri Bergson into and wrote poems, stories, novels and diaries of his travels to Spain, Italy, Egypt, and Russia. Kazantzakis died in Germany in 1957 and was buried in his birthplace.

His most famous book, "Zorba the Greek," was published in 1946. Its appearance in English in the United States, in 1954, made its author a runaway success that exposed him to the rest of the world.

The novel was published in Hebrew long before Greece became a popular tourist destination for Israelis. In 1958, Hanoch Kalai's Hebrew translation of "Zorba the Greek" became the first title in Am Oved's Sifriya La'am (People's Library) imprint.

A new Hebrew translation by Amir Zuckerman was issued in 1995 with the book's original title, "The Life and Adventures of Alexis Zorbas."

The acclaimed novel depicted a friendship between a European intellectual and a miner, who was also a con-man, a potter and a santuri player - and above all an artist in living the good life with an expert ability to seize the day and realize his passions.

Zorbas became an adored figure in Western culture, and his prescription for life, passions and animal instincts were idealized. He came to represent all of Greek culture.

Kazantzakis wrote many books. "The Last Temptation of Christ" roused a storm of controversy when it appeared.

The novel presented Jesus as a human, flesh-and-blood figure who grappled with passions and with temptation.

In 1988, the film version of the book was released, directed by Martin Scorsese with a soundtrack composed by Peter Gabriel.

The film also provoked scandal and was banned in some countries.

On Saturday the novel was the subject of a lecture given by Kazantzakis society member Stelian Luznan. Luznan, an electrical engineer from Tel Aviv, spoke about the association between Kazantzakis's theological approach and the thinkers who inspired him - Buddha, Nietzsche and Lenin.

Kazantzakis is considered a national writer in Greece, and some consider him to be a nationalistic writer. He was a proponent of the use of the popular Greek spoken on the street, and engaged in frequent battles with Athens intellectuals after arriving there in 1906.

Some considered Kazantzakis to be a kind of Zorba himself. He drew his glorification of the instinctual, the passionate, from the philosophies of Nietzsche and Bergson. As a boy he attempted to work in the coal mines in Crete, where he befriended a full-of-life Macedonian named Yorgos Zorbas.

Kazantzakis was also a great fan of the Jewish people. He made many Jewish friends during his years in Europe. "He was fond of Jewish subjects and studied Hebrew with a rabbi in Crete," Dalyot says.

* Kazantzakis The Judeophile
from Selected Letters of Nikos Kazantzakis 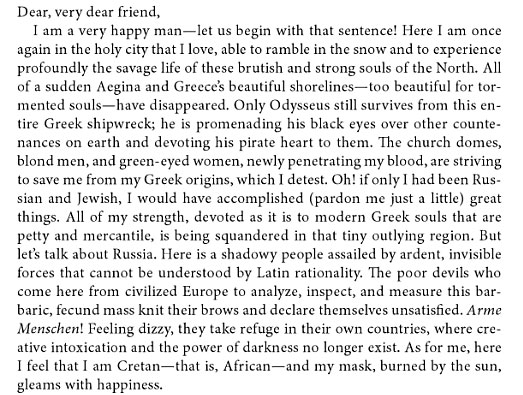